Get a Free Quote

Speak to one of our customer service representatives to set up a time for us to come to your location, assess your situation and provide you with a cost-effective solution.

Once you have your quote, we’ll work together to determine the best date and time to perform our high-quality Pet Urine Cleaning services.

After we’ve completed the service, we’ll walk through the property with you and discuss everything that was done and ensure your total satisfaction prior to payment.
Get a Free Quote

Your floors and fabrics may be damaged permanently if urine is not treated properly. It can also create an unhealthy environment. When urine is introduced to a surface, the pH of the liquid is roughly 5 or 6, which is on the acidic side of the pH Scale, and during this time, it is at its easiest stage to fully remove. However, once it dries, the pH raises to a level of 10 – 12 making it much more difficult to remove. Also, the warm acidic state of the urine is a perfect breeding ground for bacteria, which begins to flourish immediately. When the urine begins to oxidize and react with the fabric, you’ll see a color change, which will become permanent if the urine is not removed immediately.

The changing of colors in your fabric is brought on by the ammonia that forms as the urine transitions. If the urine is left for days or weeks, depending on the type of fabric or floor type, the dye structure will change, resulting in permanent color staining.

There are a couple of odors associated with pet urine. The original smell comes from bacteria that tend to thrive in dark, warm places that supply a never-ending food source. This bacteria growth breaks down the urine which turns into amino acids. These amino acids will work their way into the fabrics, becoming part of the fibers. The decomposing urine reveals a very unpleasant odor, and when dried urine is remoistened, it gives of a smell of ammonia.

A second source of odor can often be chemicals present due to dead bacteria deep in the carpet. This smell can be intensified based on the humidity of the room or space. When urine dries, hydrophilic salts and crystals are left behind which basically means they attract water. Even dry urine odor can intensify during humid months as the salts attract moisture and give off ammonia gas. In order to permanently remove that odor, special attention must be given to completely remove those salts from deep within the carpet.

Get a Free Quote 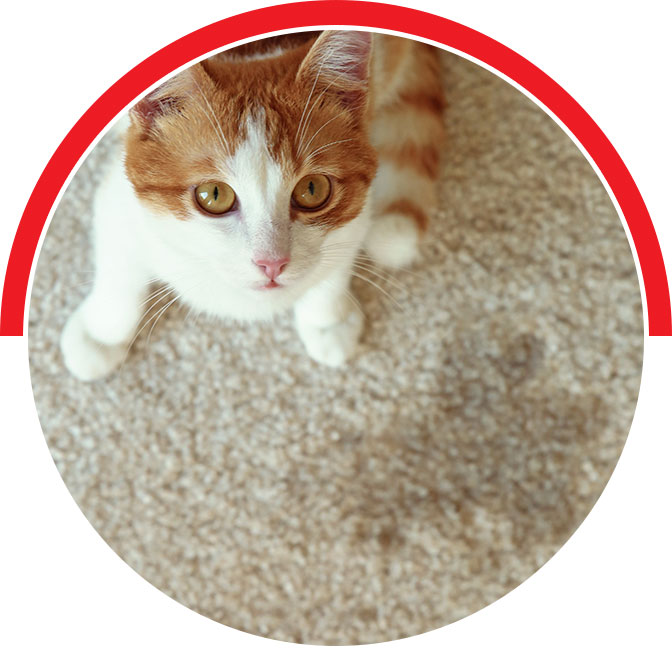 “Zach was prompt, attentive, and informative with ideas on dealing with high traffic areas. Zach was very pleasant. I will certainly use Master Clean again.”

“Technician was excellent. He was polite, courteous, knowledgeable, and extremely competent. I would request him again and recommend him to others.”

“David was great and helpful and made sure to explain what he did and how the cleaning reacts with old stains that are set in. Had a great experience!”

“Damon did a wonderful job, carpets look beautiful. Also, he is very professional and so polite. A joy to have in our home. Thank you”

“David is a very nice polite young man. He did a great job. Hope we can ask for him the next time we need carpet cleaned.”

“No problems great praise for tech Zach. I have a lot of other services at my home. Terrible job I will never use anyone else. Zach did an excellent job. Thank you.”

“No problems very good service and got carpets clean very polite will definitely use this company again.”

“This was the best job cleaning ever from your company. Ules did an excellent job, great guy!!!”

“We had Rhyan clean our carpets today. He did such a excellent job today. Highly recommend him and prefer to have him do our carpets again. Thank you Rhyan!!!”

“Brandon was awesome. On time, friendly, knowledgeable and hardworking. He was committed to doing the job well and making certain we were a happy satisfied customer. Thank you for the hard work. Our carpet looks great.”

“Brandon was on time, he was clean, courteous, respectful, and did a REALLY good job. I have used MC for probably twenty years and you have never disappointed.
Thanks!”

“Ules was very nice, courteous and took the time to explain everything to me so that I understood what I was paying for today. I would recommend Master Clean and Ules!”

“Damon came for our cleaning service right on time and was professional and listened to my concerns. I really felt like he took his time to do a good job. I will definitely consider Master Clean for my next cleaning service.”

“Zach was a great technician. I wish I had taken before and after photos of my berber carpet. He took the time to explain the process and how to get the berber dry. I was so happy. Thank you Zach.”

“We have used Master Clean for over 20 years and they never fail to empress me. Brandon was prompt, courteous, and did a fantastic job! I've referred friends and will continue to do so. Master Clean never disappoints.”

“Ryan did a great job. He was professional and polite. The carpet looked so good that I added more areas. We will definitely use Master Clean again.”